Robots are steadily becoming one of the hottest development areas for major pharma suppliers. With smaller batches, personalized medicine, highly potent products, and a need for flexibility, robots could offer us the solutions we’ve been waiting for.

Robots have been a point of both fascination and anxiety for many years now, with pop culture offering robotic characters that range from cute and useful to manipulative and violent. We’ve seen robots used for intelligence (C3p0 in Star Wars), robots as human guards (I, Robot), and who can forget the classic indestructible assassin robot (the Terminator).

Although most people enjoy a good robot story, robots in the real world continue to raise all kinds of questions. Although a robot revolution seems sci-fi, there is increasing discussion about the role of robots and automation in our working lives.

In the auto manufacturing industry, physical robots are well established. These robots are fast,  consistent, and cost-effective - all useful for the pharma industry. Plus, there is the added benefit for pharma that everything a robot does can be verified and accounted for.

Humans are smart – we made the robots, after all. But we are unfortunately prone to mistakes. With human error, it is difficult to plot where and why a mistake happened, which is important in pharma where minor mistakes can be extremely costly. Not only that, humans interacting with highly potent pharmaceutical ingredients is a health risk, and monotonous repetitive work is no fun for anybody.

So what kind of robots are available for pharma manufcaturing and what will they do? How will operators fit in alongside our new robot co-workers (or “cobots”)? And what will this mean for the future of the pharma industry?

Traditionally, robots were installed as part of other systems and had to be locked behind cages to avoid humans getting caught up and injured in their processes. However, a new breed of “collaborative robot” has now reached the pharma manufacturing world. 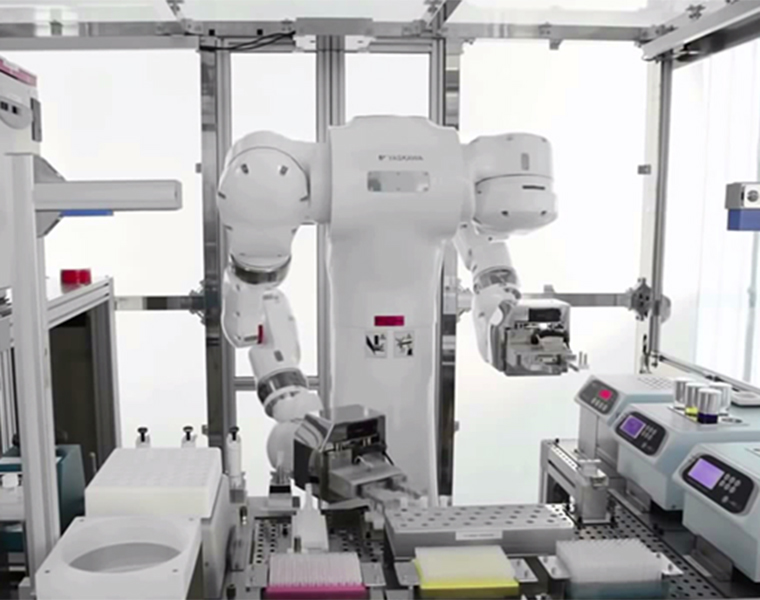 With advanced sensors and camera technology, collaborative robots can stand and work alongside lab workers safely and are already used in the assembly and pack of devices, normally in a fixed position hooked up to power and other supplies. Cobots work within the field of range and can be programmed without complex code. Instead, you can manually “show” the robot where and how it needs to move, or tap in instructions using a tablet.

In pharma, these cobots could revolutionize the way we work. Since they tend to do repetitive, boring tasks (like the staging of leaflets, cartons and cases in packaging) their human counterparts can focus more on the intricate details that they are qualified for, and reprogramming the robots when flexible changes need to be put in place.

Part of the group above and officially named “autonomous mobile robots” these nifty movers are predominantly used for transporting goods – be that raw materials, equipment, or samples. They are both autonomous and wireless and can adapt to the surroundings around them. They won’t, for example, bump into things, but instead recalibrate their path to get around the obstacle.

Mobile robots are already used in some areas of pharma manufacturing, such as moving finished and semi-finished goods for shipping and transporting. Since they can work under any conditions (within reason), moving around in a cold warehouse with low humidity for long durations with no protection is no problem.

As they become cheaper to install and integrate, there is hope that they will be used from start to finish. However, even though mobile robots have been used in cleanroom environments since the late 90’s, the newest generation still needs some adaptation to reach modern cleanroom standards.

These robots are relentless. They can pick up and move objects, transfer objects from one place to another, and sort items in an assembly line 24/7. This speeds up processes and reduces costs while removing the risk of repetitive strain injury for human workers. 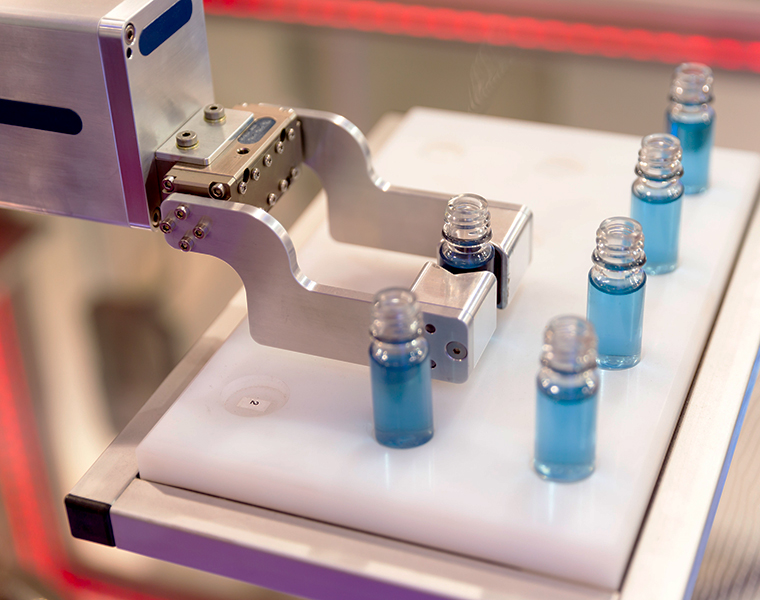 With the demand for small batches rising, both flexibility and repeatability are a plus. Pick and place robots can easily be adjusted to new products and continuously repeat operations without the risk of human error. When designed for use in cleanroom environments, they also significantly reduce the risk of human contamination, while keeping a digital record of all that they do (important from a cGMP standpoint).

The future of pharma manufacturing - Pharma 4.0

Robots are not meant to replace people – people still need to be involved for many other manual operations and to support robotic systems. Using robots also reduces the need to move all operations to countries with lower labor costs, spreading work more evenly across the globe. But it is undeniable that robots will change the future of pharma and the way we work together.

This is because to stay competitive as an industry, we need to seriously consider the cost of manufacturing. Robots not only reduce labor costs, they also speed up operations and make sure our factories are aligned with cGMP. Pharma 4.0 is full of new challenges and opportunities - staying ahead of the game and embracing new methods could be the key to future success. What can pharma manufacturing gain from implementing robotics and automation in the earliest part of the pharma value chain – research and development? Robotic solutions are changing the game of biotech

With the FDA encouraging the use of innovative technologies, it’s only a matter of time before the use of robotics in biotech goes from first-mover to standard. Are you ready? Making a robotics strategy

The fourth industrial revolution is upon us and emerging technologies like robotics are dominating the manufacturing industry. Is your pharma facility ready for robotic solutions and pharma 4.0?